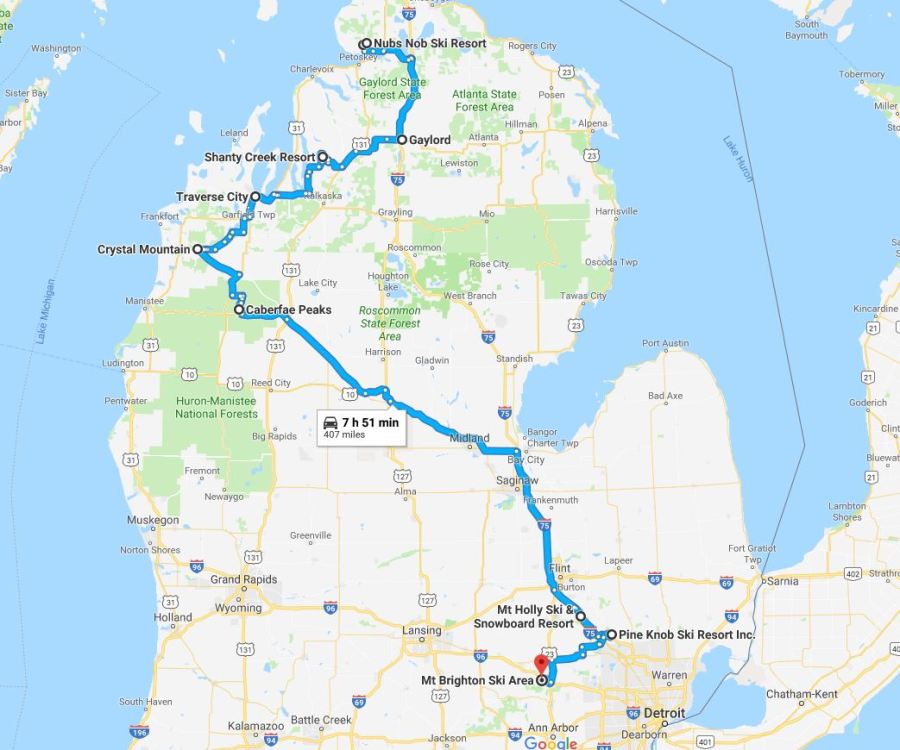 Last month, I skied Aspen Highlands and Aspen Mountain in one day and thought that was pretty neat, but a crew in Michigan is putting me to shame this weekend.

Friday night, David Zemens and Sapato Caputo of Agnarchy began a quest to snowboard at 16 ski areas in 24 hours in Michigan.

At 9 p.m. Friday night, the two took their first lap at Boyne Highlands in northern Michigan and started winding their way down the state. They expect to finish at 9 p.m. Saturday at Mt. Brighton in the southern part of the state.

Here is their expected route.

The two will begin at 9:00 p.m. this Friday at Boyne Highlands in Harbor Springs. They’ll continue on to Nub’s Nob that same evening and then head down to Boyne Mountain in Boyne Falls to finish out the night. “This works out well because Boyne Mountain happens to be open for 70 hours straight during this time to celebrate their 70th birthday and raise money for Challenge Mountain, a ski area solely dedicated to assisting people with special needs.

On Saturday, the pair will begin in Gaylord at Treetops Resort, then Otsego Club and Resort. From there it’s on to Schuss Mountain and the Summit slopes at Shanty Creek.

After hitting slopes at four more Northern Michigan ski areas, they head downstate, with stops along the way and a finish at Mt. Brighton before 9:00 p.m.

This is not the first time the Agnarchy guys have tried a journey like this, either. Back in 2013, they skied 12 areas in 24 hours across Vermont.

The Michigan route will likely best their Vermont effort, but it wont conquer the world record.

This falls short of several world record claims, including an official Guinness record of 17 which took place in Japan, and at least one unofficial record of 17 which took place in the 3 Valleys region in France. Not to make light of those efforts, but regions where most or all resorts are interconnected leaves a lot less to chance, our route will involve about 500 miles behind the wheel, so the weather, road conditions, even the vehicle itself are all variables we’ll have to contend with.

The reason MSJ is so jealous of these guys is because of why they are doing it.

They partnered with the Michigan Snowsports Industry Association and started their journey on National Learn to Ski/Snowboard Day.

We want to draw attention to the fact that Michigan has so many great ski slopes within an easy drive of most metropolitan areas,” says MacWilliams. “In fact, we have more ski areas than any other state except New York. No matter where you live, in either the Upper Peninsula or Lower Peninsula of Michigan, you are within a 2 to 2 ½ -hour drive of a ski area.

Is something like this possible in your state? Are there enough hills in Wisconsin or Minnesota?

If the Agnarchy guys want to find out, MSJ hopes to be along for the ride.

MSJ on the 'gram

Saying goodbye to the strangest season in a lifetime. Our final dispatch from the sunny slopes of the Midwest. Link in bio!
Ever been to @mthoodmeadows? You should go. Full trip recap in our bio.
Have you ever played this game? I poured hundreds of hours into this game as a kid and I wish I could play it again. Our newest post is an ode to Ski Resort Tycoon. Link in bio!

In case you missed it